King of The Castle – Not me

Posted on November 27, 2015 by Englishman in Latvia

Many years ago, whilst living the ignorance which comes with inexperience, I foolishly believed that when I became a house owner I would be the King of all I surveyed. With a little more maturity I came to realise that it was not men who ruled the roost but their partners. Unfortunately some men are still deluded enough to believe they are in charge when it just their wives/partners allowing them to continue living in their own fantasy world.

After living in Latvia with Timo for the past 18 months I now know I was wrong again. It is not men or women in charge at home, It is the CAT. 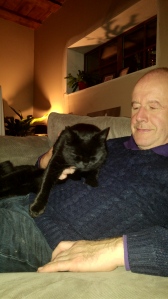 Yes, the CAT!!!!! Not content with just being King of the jungle, cats seem intent on achieving world dominance. I have never lived with a cat, so when Timo adopted us I was totally unprepared for what was to come.

Now,  after a hard day at work I like to relax on the sofa, checking my emails catching up with the news and so on. If Timo is inside this is just not possible as he seems to hate technology. The moment the computer comes out, he miraculously appears from no where and proceeds to walk all over the keyboard until I put it away and give him some attention. At this point he will lie down on my chest demanding to be stroked. If I don’t comply he climbs further up my chest until his nose touches my face. At this point I stroke him as the thought of a cats tongue in my mouth doesn’t really appeal to me. Now just to punish me for not stroking him immediately, he starts digging his claws into me in short pulses. The pain is definitely unpleasant, so at this point I gently remove so as not to get in trouble from Inta who is a fanatical cat lover.

Even bed doesn’t offer a respite from Timo’s torture. This time it’s more mental than physical. Just after settling in to bed, ready for a good nights sleep, he appears. Climbs on top of me and proceeds to do an impression of a dressage horse, going round in circles whilst digging his claws in the duvet.

There are no limits to Timo’s attempt at dominance. If we don’t change his water daily he jumps on to the kitchen work surface next to the tap, just to remind us. Finally he knows how to open all the doors so there is no privacy in our house. I have however found his Achilles heel, he is terrified of snow or should I say how cold snow feels when he walks on it.

Could this be my leverage in gaining back some degree of control!!!

This entry was posted in Latvia and tagged cats pets. Bookmark the permalink.

3 Responses to King of The Castle – Not me

Plowing through Life in the Country...One Calf Nut at a Time

Tales of A Migrant
wineterview

The Eco Schmico blog is for you and me.

Things we do for fun without spending too much.